With the release of IDE Fix Pack 6.1, the Compiler Speed Pack not only makes the compiler compile faster but it can now also change the generated code, something that IDE Fix Pack has never done before. For this, new command line compiler options are introduced. They all start with “-x” (eXtension) followed by the Compiler Speed Pack option (-x-ff -x-fdi -x-fvs -x-fpr) and if you want to use them from the command line compiler you need to use fastdcc32/fastdcc64.
You can specify these options in the “Project/Options…” dialog under “Delphi Compiler/Compiling/Additional options to pass to the compiler”. You may need to rebuild the project to see an effect as only then the compiler will generate new code. 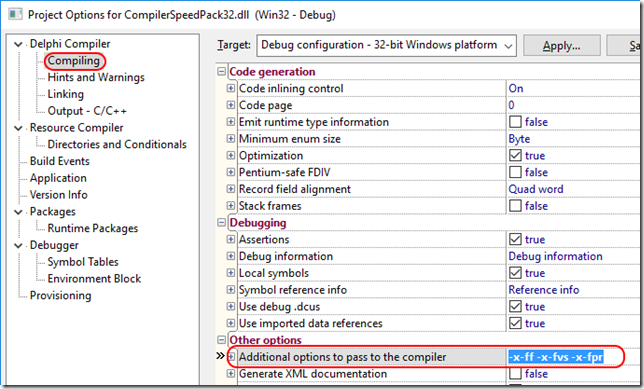 Windows 10 Creators Update 1703 caused issues with all Delphi programs, libraries and packages because it changed how Windows loads imported DLLs in such a way that it causes performance issues and can crash the debugger. Delphi 10.2 Tokyo Update 2 fixed this by not producing multiple dll import sections for one DLL anymore. IDE Fix Pack 6.1 implements that “feature” for all previous Delphi versions (2009-10.1 Berlin) and extends it to not only eliminate duplicate dll imports but also duplicate delay dll imports.
This patch changes the generated binary, the Win32 and Win64 compiler outputs, and it can be disabled by using the new “-x-fdi-“ option.

The next patch that changes the Win32 code generator is the “fast floating point” option that C++Builder users may know from the “bcc32.exe -ff” option. It removes all “fwait” instructions that the compiler usually emits after floating point operations. Removing “fwait” may cause FPU exceptions to be thrown at the wrong source code line.
This option is disabled by default and can be enabled by specifying the new option “-x-ff”.

When calling virtual methods through an interface the Win32 Delphi compiler has to route that call through a helper function that translates the interface reference into an object reference and calls the virtual method. For this helper the compiler uses the XCHG instruction that has an implicit CPU LOCK.
The new “-x-fvs” / “-x-fvs=1” option replaces the XCHG instruction with an alternative code and if the called virtual function doesn’t use the ECX register for the 3rd parameter, it generates a direct jump into the virtual method.
The “-x-fvs=2” option replaces the XCHG and uses ECX if available but if ECX is not available it keeps the CPU’s “return stack cache” valid by replacing the RET with a JMP instructions. For this it uses stack memory below ESP.

For some functions that meet special conditions the Win32 compiler emits stack frame code that fills the stack with zeros to clear variables with managed types. If there are too many of those the compiler uses a loop and the XCHG instruction to restore the ECX register that is used as the loop counter.
The option “-x-fpr” replaces the XCHG with an alternative code.