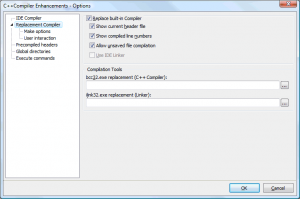 C++ Compiler Enhancements (bcc32pch) is a plugin for BDS/TurboPro 2006 and C++Builder 2007 that improves the compilation and code insight speed of the IDE. This is achieved by the usage of advanced precompiled headers and optimizations in the IDE<->Compiler interop code. Furthermore the tool allows you to do the compilation and linking in a separate process what gives you real background compilation. The own make system improves the speed of the “Make project” action, too. It also compiles pascal files first so the generated .hpp headers are available when the .cpp files are compiled. For a more detailed feature list see the Features section.

bcc32pch only speeds up the compiler/code insight. If you want to speed up the load-time of the IDE and the general speed of the IDE, you could additionally install DelphiSpeedUp that also works for BCB and BDS.

*: The plugin allows to inject a header file into all .cpp files during compilation. In this header file you can include the headers that should be precompiled.
The #pragma hdrstop is inserted below the injected include file.

Things you should know

For non-IDE projects you can use the commandline tool IDE Compiler bcc32ide.exe which is also used by the IDE plugin. This tool expects the same parameters as bcc32. In order to specify the PCH file it has another parameter -pch="filename". For a “makefile project” you can simply replace the bcc32 by bcc32ide -pch="project_pch.h" and create a project_pch.h file containing all includes you want to have precompiled.