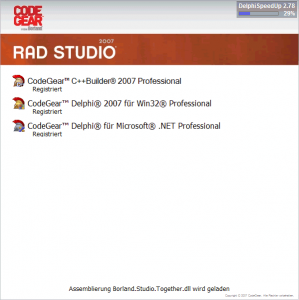 DelphiSpeedUp is an IDE plugin for Delphi and C++Builder. It improves the IDE’s startup speed and increases the general speed of the whole IDE. This is achieved by replacing some often used RTL functions by FastCode function that are optimized for the used CPU and some other faster implementations. It also employs caches when the IDE loads.

Important information: All these optimizations do not affect the compiled projects in any way. They are made in memory keeping all the files on disk unmodified. Uninstalling DelphiSpeedUp reverts every change because the optimizations aren’t persistent. They only exist in memory and are limited to the Delphi/BCB/BDS process.
Not every access violation in DelphiSpeedUp.dll is a bug in DelphiSpeedUp. Actually many of the exceptions in the RTL package are now thrown in the DelphiSpeedUp.dll because the RTL functions are replaced by the DelphiSpeedUp functions and wrong parameters like nil-pointers, invalid pointers, … now lead to access violations in the replacement code. A wrong function call just remains a wrong function call.