The source code of the Delphi IDE plugin DDevExtensions is now available on GitHub. There is also a release version for Delphi 10.4. It was not compiled by myself because I don’t have Delphi 10.4. But thanks to the DelphiPraxis fork you can download the release for Delphi 10.4 form GitHub.

Due to a performance issue in the TListView implementation (since Delphi 2), the DDevExtension‘s “Find Unit” replacement dialog was slow if your project had a lot of units and you used the filter edit. The new version 2.86 now works around that and as a result filtering becomes almost instantaneous.

There was a bug in IDE Fix Pack 6.4.3 for Delphi 10.3.2 that caused the Win32 compiler to crash. The CodeGenMod.Win32.VirtFinalSealed patch didn’t work correctly. Even if the actual patch code doesn’t run without the “-x-fvs=1” compiler command line option extension specified, the hooking code failed to inject the correct code for the compiler’s version. Only Delphi 10.3.2 was affected by this bug.

After 18 years of using a sub-domain on a very old server on a domain that wasn’t owned by me, my blog and therefore IDEFixPack got a new home.

My blog is now accessible via https://www.idefixpack.de . The old sub-domain has a “Moved Permanently” redirection to the new domain. Some time in the future the old sub-domain will be deleted.

IDE Fix Pack 6.4.2 addresses two bugs. It fixes an issue with the TCustomListBox.ResetContent patch that was introduced with version 6.4 and caused EInvalidPointerOp exception with 3rdParty design editors. And it also fixes a 9 year old bug with outdated data in the UnitName HashMap patch after a debug session that caused the compiler to crash with an internal compiler error on the next compile.

There was a bug in the IDE Fix Pack 6.4 for 10.3 Rio code that searches for the StyleUtils functions. It contained a hard coded (absolute) address that is only correct for the Update 1 VCL.BPL. So the patch failed for the RTM version or if the VCL.BPL is relocated (what is unlikely as it is one of the first DLLs that are loaded).

Furthermore there was a wrong $IFDEF in the code that caused Delphi 2010 to crash with an access violation if the TCustomListBox.ResetContext method was called on a control whos Handle wasn’t allocated yet.

Only the IDE part of IDE Fix Pack is affected so there is no need for a fastdcc hotfix.

The new IDE Fix Pack 6.4 not only adds support for Delphi 10.3 Rio (including Update 1) but also comes with some new IDE und Win64 compiler performance optimizations.

When I work on my IDE plugins I constantly need to debug the IDE. To make my live a lot easier I wrote an IDE plugin that adds another symbol resolver to the Delphi Debugger, so the debugger can use the *.jdbg files and show the actual function names (including line numbers) in the call stack. Even the CPU view uses more colors to show call, jmp, ret, nop, try/finally/except and more in different colors and resolves call and jump target addresses to their names if available.

In order to identify the code that causes performance issues I use “poor man’s profiling”. I pause the IDE multiple times while the task that takes up the time is running and look at the call stack. If a function comes up in all call stacks, it is is either the culprit or a function that is called very often (or you are just unlucky).

If the task takes really long, pausing the IDE withing the debugger IDE via the pause button is doable, but if the task takes only 2 seconds switching to the other IDE or moving the mouse to the pause button can be too slow, so I use the F12 debug hotkey that Windows reacts to and notifies the debugger to pause the process. Unfortunately Microsoft disabled that feature with Windows Vista. So I had to emulate that functionally with my own IDE plugin that reacts to the F12 hotkey while the debugger is running.

Both tools come without an installer, so you have to install them by hand. After extracting the 7z files you have to create two registry entries (Delphi 10.3 Rio):

Start the RAD Studio IDE. There is nothing special here.

Starting the IDE that we want to debug

For IDE plugins and component packages

If you are writing an IDE plugin or want to debug a component, you open your project and in the “Run/Parameters…” dialog set the “Host application” to “$(BDS)\bin\bds.exe” (without the quotes). If you want to use a different registry key for the debugged IDE then you can also set the “Parameters” to “-rMyRegistryKey“. That way the IDE starts with a new registry key having a clean IDE, so it doesn’t have any additional library paths, components or IDE plugins installed that.

Compile and Start your project.

I use the -r command line parameter for my IDE plugins because the debugged IDE has to load the just compiled versions of the DLLs instead of the release versions that are installed into the debugger IDE.

If you only want to identify an IDE bug or a performance issue you can start the second IDE without opening any project by using the “Run/Load process…” dialog. Select the “Embarcadero Windows 32bit-Debugger” in the Debugger combo box and set the “Host application” to “$(BDS)\bin\bds.exe” (without the quotes). Set the “After load” radio button to “Run” and press the “Load” button. 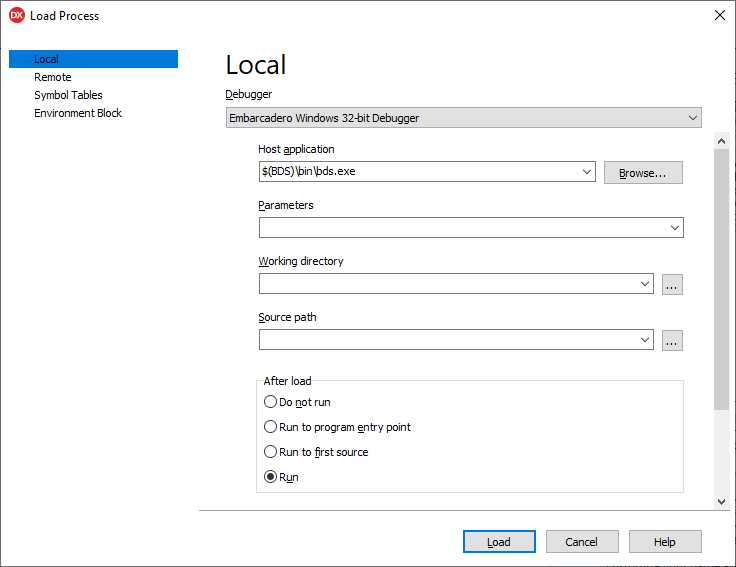 The IDE throws some exception during the startup, that are handled by the IDE but now that a debugger is attached to the IDE’s process you will see them.

The first exception you may encounter is an EFOpenFile exception for the “%USERPROFILE%\sanct.log” file. That has something to do with the product licensing and now that two IDEs are running the first holds the file exclusively open causing the second IDE to fail to open the file. You can ignore this exception (you may add the EFOpenFile exception to the ignore list if you start the debugged IDE multiple times.

The next exception is ESanctSocketException “Cannot start instance counter. Port is already in use (10048).”. Again caused by the product licensing. This time it wants to listen to a port but the debugger IDE already opened that port. Add that exception type to the ignore list because we don’t care about it and the exception type is a special type not like EFOpenFile)

The EFOpenFile exception for the sanct.log file is thrown again. Skip it again.

And finally we reach the EAccessViolation from the welcome page (something the IDEFixPack for Rio will fix). Skip that one.

If you are in the editor you may see an EParseError exception. You can add that exception to the ignore list.

Now you can start the task that you think is taking a lot of time and while it is causing the CPU or I/O usage to be high, you can pause the debugged IDE by pressing the pause button in the first IDE or by pressing the F12 debug break hotkey in the debugged IDE. This brings you usually to the CPU view and you can have a look at the call stack of all the threads by double clicking on a specific thread in the Threads list what shows the thread’s call stack in the Call Stack window. 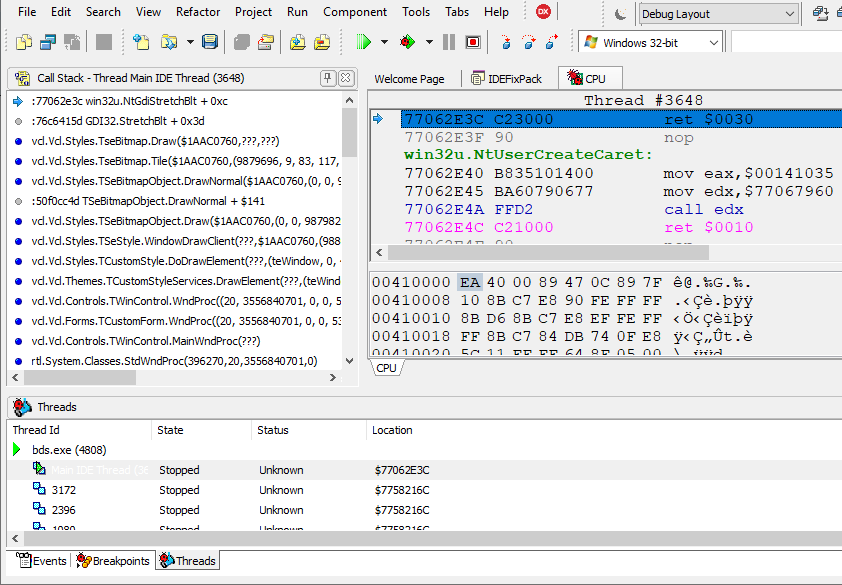